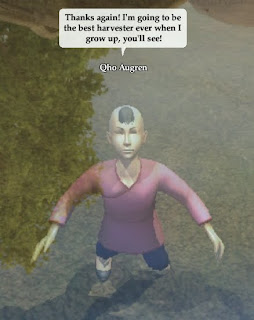 Meet Qho Augren!  Qho is a young boy from the Village of Shin in EverQuest II.  He gives a small questline called "A Gathering Obsession", in which he explains his fascination with harvesting and his intention to be a harvester when he grows up.  However, since his parents say he's too young to go out harvesting yet, he asks your help to bring him back samples from all over Norrath so he can study them.
Lots of samples.
From ALL over Norrath.
Did I mention lots of samples?
The quest is actually quite painless if you start it at a very low level and just slowly update it as you level up your harvesting skill.  Going back on a high level character and trying to do it all at once though is rather painful.  So poor Qho is one of Norrath's most-often-wished-dead questgivers.
What Qho has to do with a Mighty Mugg (and if you don't know what a Mighty Mugg is, wikipedia explanation here) is related to the SOE Fan Faire coming up this weekend.  Apparently the Community team got a bunch of the blank Muggs, and they asked SOE staff members if we were interested in painting one for a "silent auction" to be held at Fan Faire.  So, I offered to try one if there were any left over, and there were, so I got one.
I debated what character to paint and toyed with the idea of a Billy doll, but then I thought of everyone's favorite target of death threats Qho.  Since Qho's quest is actually my fault it seemed more appropriate than Billy (who was Ilucide's fault).
First I had to get a good screenshot of Qho.  This is a bit tricky since he spends all his time swimming around underwater in a small pond, which doesn't help get the detail.  So I also took a picture of Spark Augren, who looks very similar to Qho but with different hair.  (Yes, I could have logged in as a GM and forced Qho out of the water, but I was at home and lazy so I just grabbed what my regular play account characters could get.)

Here's the blank Mugg, lightly sprayed with primer, holding my paintbrush and awaiting its fate! 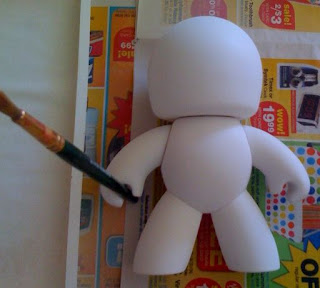 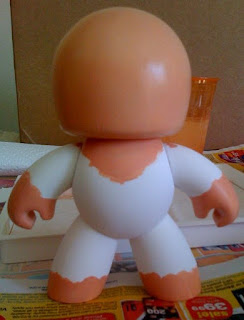 Next, Qho's clothing, which appears to be dark blue trousers and a pink tunic.  Here he is standing on my laptop beside his own picture, for comparison. 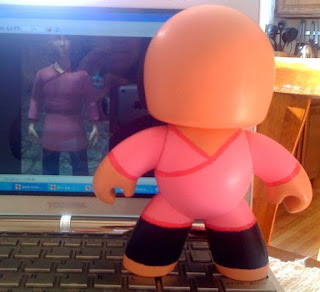 And then the hard part, which is the face.  I had a lot of trouble with this, not being an artist in even the most remote sense!  But here is the finished Mugg, ready for shipping to Fan Faire: 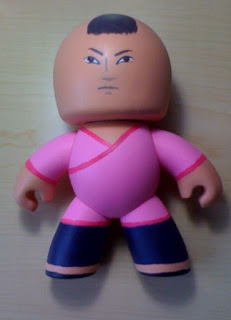 I am sure it will look like the work of a 10 year old beside the marvels that our artists are creating, but it was fun to make, and perhaps someone will want it, if only to use for target practice!  =)

Edit to add: check out Greg (Rothgar's) Mighty Mugg on his blog!  Wow - puts mine to shame!

Another update to add:  Qho was won at the auction by Niami Denmother of EQ/EQ2 Traders. She has a suggestion thread up on her forums to get opinions on what his fate should be!

I also hear that Greg's Mugg, and I believe Aaron (Gnobrin's) Mugg (an awesome looking clockwork), which were definitely the two most popular Muggs, were won by the producer of the Jace Hall show (Jace was a co-host of Fan Faire for us).
Posted by Domino at 9:08 PM