This is what a cake looks like in Minecraft:

A Minecraft cake is something I've been wanting an excuse to try making for a while, since I'm a big fan of Minecraft, and of cake. So what could be better than a Minecraft cake?  Duh, NOTHING!  This was made for fun and given away as an attempted peace offering. It was fun to make and pretty simple!

I used my super quick and easy egg-free cake recipe (see below - instead of chocolate chips I used a bar of orange dark chocolate, chopped up into small chunks), and a whisky-heavy dark chocolate butter cream icing.  Conveniently, I already had a whole tub of the home made buttercream icing made up in the fridge, since I've been making a lot of cupcakes and cakes for people having birthdays at work and at my former work.  As I made this, I found myself saying "it's always useful to keep a tub of chocolate buttercream icing handy in the fridge!"  ...Words that 10 years ago I would never have expected I'd find myself saying, but there you go.

So anyway, I needed two square cakes.  All I had was some square pyrex dishes, but I lined them with some parchment paper for ease of extraction and then trimmed the edges off once they were cooked to make them fully square and flat sided. 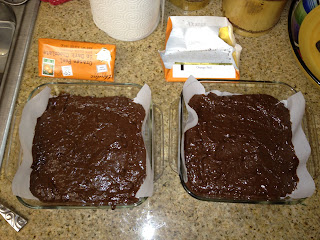 Cake trimmings: just as yummy as the cake. Although I gave the cake away, I did get to eat the trimmed off edges. Part of a nutritious and delicious breakfast! 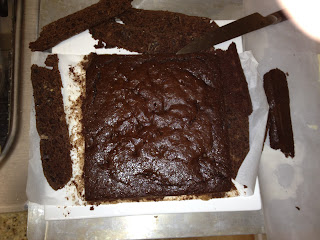 Once the cake was cooked and cooled it went into the freezer overnight (because it's easier to frost a frozen cake). Meanwhile I was melting white chocolate chips in a plastic freezer bag, in a bowl of warm (but not too hot) water.  If you get chocolate too hot the texture changes and becomes all grainy, so you have to melt it very slowly and carefully.  Most of the white chocolate chips were melted in one big bag, as shown below, but I separated out a few into a smaller ziploc bag and added red food colouring to that bag only. 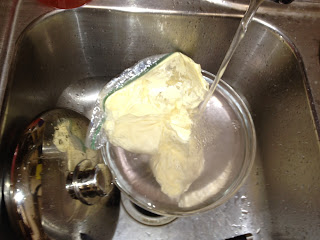 Once the chocolate was melted, I poured it out onto a sheet of parchment paper, used a spatula to smooth it flat into an approximate square, and covered with cling film to keep it clean while it cooled. 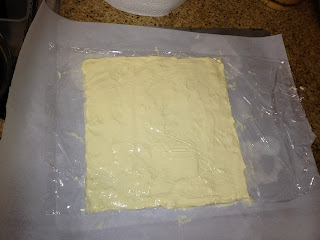 The red coloured white chocolate had to be mixed up carefully before the colour was smooth and homogeneous.  It was softer than the pure white due to the added colour, but that just made it a bit easier to work with.  It too was spread out flat to cool. 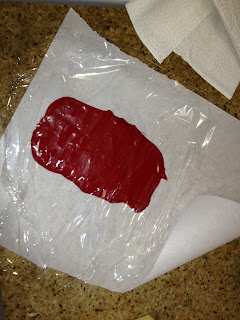 Once the sheets of chocolate were mostly but not entirely cool, I used a sharp knife to cut them into squares.  If the chocolate gets too cool it'll just shatter when you try to cut it, so it needs to be cut before it's totally cooled.

Next day I removed the cake from the freezer and put the first layer of cake into the container it would be delivered in, and covered it with buttercream icing.  You don't have to freeze the cake, but it has to be cool (or the buttercream will melt) and it's much more crumbly if it's not frozen which makes icing it neatly a lot harder.

The container is just a simple clear box with lid picked up from an office supply store.  The base of the container is a layer of cardboard which (a couple days before) I'd cut to fit the container, and painted to look like a sheet of Minecraft grass, and then wrapped in cling film.  It took a little extra time to make this base, but it ended up looking great! 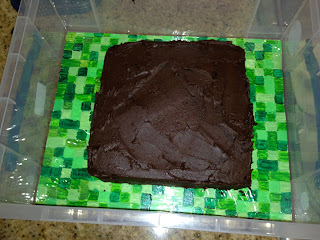 Once the first layer of the cake was iced top and sides, I put the second layer of cake on top, and also covered it in butter cream.  Once that was in place, it was time to start decorating.  The sheets of white chocolate had been cut up into squares previously and stored in the freezer to keep them hard.  I placed the white chocolate squares so they covered the top, with small spaces in between to keep the pixellated look.  Around the upper edges I placed full and half squares, alternating, to look like the Minecraft cake edge you see above.  Technically I should have done 7x7 squares instead of 5x5 to be completely accurate, but I failed to plan this well enough when cutting the squares. This was easier anyway and still looks good!

Finally, on top of the white chocolate, a few red chocolate squares of varying sizes, to match the pattern of the Minecraft cake as much as possible. 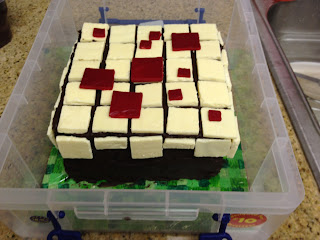 I'm definitely not a very skilled cake decorator so I was happy this worked, and was also pretty easy.  I think it turned out really well, although I will improve a few things for next time. 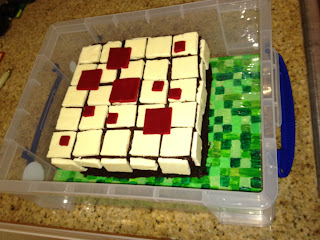 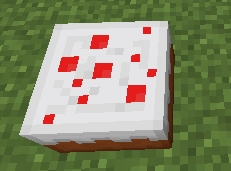 Melt butter gently and allow to cool for a minute or two. Add everything else except chocolate chips and mix well using a fork or whisk until smooth. Add chocolate chips (can either mix in, or leave sprinkled on top). Pour into a cake pan and bake in a preheated oven at 350F for about 30 minutes, until a toothpick stuck into the middle comes out clean. Wait until cool (refrigerate or freeze so it won't crumble when being iced), then cover with the icing below. (You can also use this recipe to make cupcakes, these will bake faster in about 20 minutes so check sooner.)

Mix well, adding more liquid if needed to soften up. Spread on cooled cupcakes then refrigerate.
Note: the icing ingredient measurements are pretty flexible - add more or less of anything according to whatever tastes good!
Posted by Domino at 8:51 PM 3 comments:

All the Avengers and other super hero costumes last year inspired me to try a Wonder Woman costume for Halloween 2012.  I loved the old Lynda Carter TV show way back when it was new, so I started looking at the details of her costume: 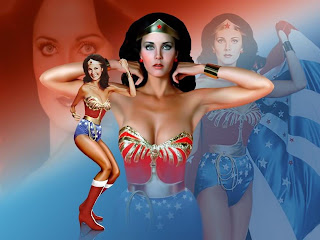 After making my Felicia Day "Codex" costume 3 years ago, and sewing the corset from scratch, I swore I was never going to do that again, so the first task was to find a corset of the right color that I could use as a base.

To the rescue: sexy "Santa Baby" costume, which I think was from Amazon, or possibly ebay: 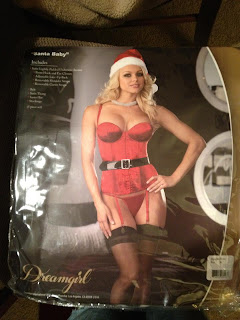 The straps were already removable, and the hat, belt, and g-string no use, but the corset itself was just the right colour and a good starting base.

However, this corset had metal hook-and-eye fastenings up the front, and laces up the back, which were both problems.  I unpicked the stitches and removed both.  The front had to be solid fabric, because the gold eagle would be sewn on top of it; and the laces at the back looked wrong for Wonder Woman.  I sewed both up, and instead unpicked the side seams and sewed in zippers.

Since removing the laces and the hooks made the corset width smaller, it was now too small, and I needed to add some extra fabric at the sides also so I could fit into it! Fortunately, a matching red satin was pretty easy to find at the local fabric shop.

Once the corset fit comfortably, it was time to sew on the golden decorations.  The fabric shop also had gold spandex and thread, so I sewed a lot of gold tubes, and the cat was VERY helpful as I tried to lay out the eagle wings. 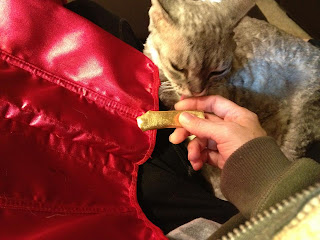 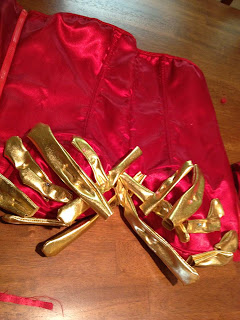 The spandex was a real pain to sew; I think I wasn't using the right type of needle, but I'm definitely going to avoid spandex again as much as possible!  However, eventually the feathers and then the eagle and rest of the gold detail were in place, and the top was done. 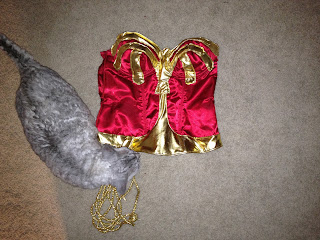 I didn't try to make the outfit a one-piece; I ordered some stretchy blue athletic shorts from Amazon and simply sewed some white stars onto them.  Comfortable and not too high cut. 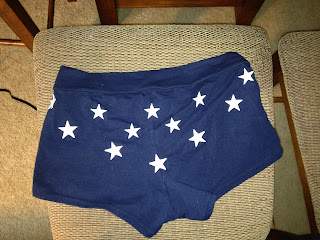 The shorts were still fairly short however and female super hero costumes tend to be rather more revealing than male ones, and since I'd likely be wearing it around work colleagues, I decided an added skirt would be appropriate. I came across this great blue gauzy material with silver stars in the "seasonal" fabric section: apparently it's Christmas-y?  It was perfect for a skirt.  And, apparently, a cat tent. 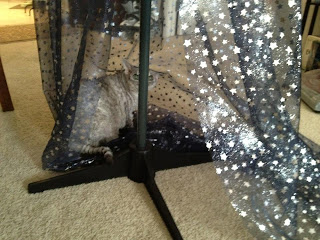 Rather than make a full skirt, I just sewed the fabric to some more of the gold spandex as a waist band and added a fastening at the front so it would be open at front, but long at the back.  I also sewed lots of gathers into the skirt so that rather than hanging down straight, it hangs in gathers.

Wrist band and headband were easily sewn out of the same gold spandex.

I'd found the boots fairly cheaply on Zappos.com back around February, and I used white bandage tape to add the highlights. Add some flesh coloured stockings, and of course the invisible plane.

And so it was assembled! 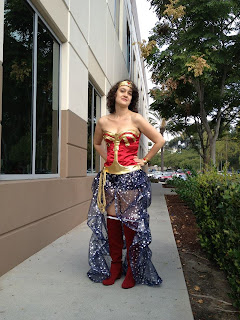 This took a LOT of work, probably more than last year's dalek outfit, but everyone seemed to like it.  And it was actually pretty comfortable too - the headband (which was slightly too tight) and the contact lenses were the most uncomfortable parts. 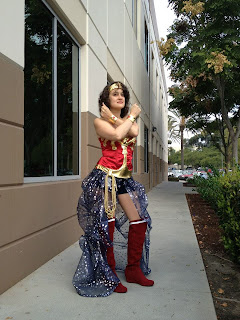 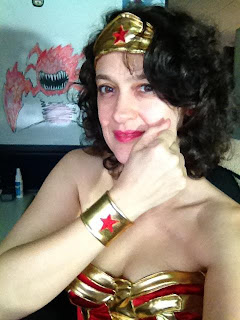