Game designer at the races 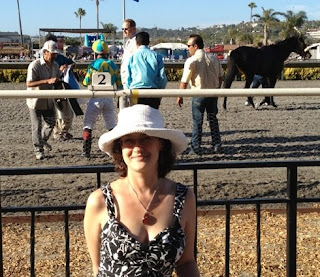 Just got back from an afternoon with friends at the Del Mar Racetrack, watching the horse races.

This is only the second time I've been to horse races, and I was really just there for the fun and the company, not expecting win anything since I certainly don't have the knowledge needed to put the odds anything close to in my favour. And nor did anybody else there; the others with me that I asked said their strategies for picking horses were:


Reverting to my scientific training not to mention game design habits of thought, I decided to take the opportunity to do a little experiment.  My plan: in each of the races I would put a bet on two horses to win.
Then I would compare the overall results and see if there was a significant difference.

Here are the results (I missed the first 2 races as I arrived late):

Race 3:
Race 4:
Race 5:
Race 6:
Race 7:
Race 8:
Race 9:
Final conclusion: out of 7 races, the logical choice based on my criteria above won 3 and placed 5 times (placed means 1st or 2nd).  The irrational pick based solely on the name didn't win at all and placed only once.

While this certainly isn't a big enough sample size to be statistically significant, it's still a pretty suggestive difference.  I used the jockey win record as a basis for picking the winner because it seemed logical and just happened to be available in the race booklet.  I imagine it would be possible to take a little longer to study more information and find some other important factors besides the jockey's track record which would give better odds.  (I'm told my grandfather used to supplement a meagre student income by betting fairly successfully on horses, but felt it was appropriate to give this up when he became a clergyman.)

That said, the successful jockeys are riding good horses and are expected to perform well, so the odds on the bets don't return a whole lot. For races 3 and 4 I just doubled my bet, and for bet 6 I quadrupled it, but these do not make the kind of big wins you retire on. Overall I still did not break even (I was betting on each horse to win). If I'd bet on the horses to place (first or second) instead of win, I would have won 5 times instead of 3, but won only half as much money since that changes the odds, so I still don't think I would have come out ahead.

All of which just goes to show that:

Also, that you can look for game design in almost anything if you try, even horse races. This is the kind of thing that scientists, and game designers, think about when they look at any kind of game ...

Posted by Domino at 7:53 PM No comments: