Sometimes, for reasons that we don't entirely understand (although Malcolm Gladwell took a look at some factors in his book "The Tipping Point"), an idea, or meme, or a product suddenly gains rapid popularity.  "Going viral" it's often called these days, meaning that it's no longer being spread by the owner advertising it, but it is spreading via other people, spreading infectiously, like a virus outbreak.  Sometimes it's just a silly internet video ("double rainbow!" was a recent one) but when it's a product, suddenly everybody is talking about it/buying it/using it.

This past week a small independent game called Minecraft seems to have hit that tipping point and gone viral.  I started seeing emails and links circulating at work early this week, then comments from non-work friends on Facebook, then tweets about it from people outside the game industry and outside the country.  It even got a mention on Penny Arcade towards the end of the week, which is surely a sign that a tiny independent game has "made it".  And the game isn't even out of alpha yet.

So what's the game?  Well, true to the name, it's strongly based on (a) mining and (b) crafting.  It's a fairly freeform sandbox type game, log in and you get a randomly generated world in extremely low-rez graphics.  You are (unless you try multiplayer mode) alone in the world, and must build yourself a safe haven and fend off enemies.  Enemies appear mostly in the form of undead critters:  skeletons and zombies who come out when the sun goes down and (mostly) vanish again at dawn.  A few spiders and leftover sun-resistant zombies keep the daytime interesting but are fairly rare.  You start naked with nothing, and have to make everything from scratch with your hands, slowly building up your secure fortress and your tools.  The graphics are extremely basic and the in-game help nonexistent so start off by watching some tutorial videos and then refer to the crafting wiki once you start playing. 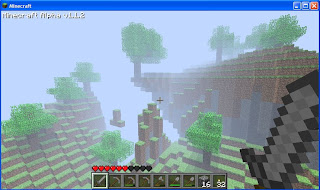 From the minecraft wikipedia site:


Minecraft is a sandbox construction game created by Markus Persson and is currently in pre release alpha. Minecraft development started around the 10th of May 2009, pre-orders for the full game started being accepted on the 13th of June.

The game involves players creating and destroying various types of blocks in a three dimensional environment. The player takes an avatar that can destroy or create blocks, forming fantastic structures, creations and artwork across the various multiplayer servers in multiplegame modes.

As mentioned, the game is still in alpha, and payment received at present will go towards getting the game into beta and then launch.  But it's already a lot of fun; definitely one of those "just ONE more turn" games that turns into 6 hours passing without you even noticing. My boyfriend picked up the game on Thursday, and I stumbled out of bed at 1:30am that night to find his side of the bed still cold and empty, and him in the computer room hunched over his laptop saying "there's a spider out there, I'm scared to leave my fortress."  He then insisted on giving me (half asleep and without glasses on to even see) a tour of his fortress before I crawled back to bed.  When I went in to work on Friday, I found two co-workers obsessively playing it on their lunch break and discussing elaborate plans to build a sheltered valley under a glass dome for more secure livestock farming.

Whether you enjoy building massive fortresses to battle zombies, or whether you just enjoy building and decorating your home, or whether you find the somewhat unique style of crafting system more fascinating, as long as you're not a graphics junkie you'll probably find something to enjoy.  As one friend said to me, "it's sort of like playing with legos, but with zombies."  How can you go wrong there?  I found the crafting system particularly interesting.  Although it's fairly basic, many items you craft are created by actually "drawing" the item by the way you lay out the subcomponents.  For example, to make a pickaxe, "draw" the handle by laying two wooden staves end to end, then "draw" the blade by laying three blocks of ore across the top.  Simple, and fairly limited, but something I haven't seen done before and makes for some very easy mnemonics instead of just having to memorize a list of recipes "pickaxe = 2 staves and 3 ores."

Since the Penny Arcade link, the poor developer's site traffic has gone so crazy that the authentication server and purchasing page aren't even working, so the developer has announced that until he gets the servers back on track, Minecraft will be free to play for all who wish to try it.  No word exactly when this will be, so here's your chance to check it out now (and if you think it's good, do consider paying to support this independent developer once the payment servers are back on line!)

Remember, it is stilll very much alpha, so save often (by hitting escape to bring up the menu, this forces a save) and do check external sites for tutorials because there is really not a lot of help in game yet.  There's definitely still a lot more polish and content that needs to be added, but there's already lots of fun gameplay potential there and I'm really interested to see what will become of it in the long run.

My best tip: if you start on a snowy world, probably a good plan to just restart until you get one with a nicer climate.  The snow really cuts down visibility, which makes it far too easy to get lost while you're still trying to figure out the game.

Fan Faire: It's All About the People

Joe "Rystall" Shoopack also followed up with some of the previous G.I.R.L. scholarship winners in this Summer Art Internships post.
Posted by Domino at 11:45 AM No comments:

What do players want?

Some bits of nightly in-game feedback that caught my eye recently for being amusing, or unusual, or interesting, or just plain incomprehensible.


Text:        I would like to see a house item called Doors. This way we can have doors in our houses. Floor item, position and grow to the desired size. These would save state so that they would not auto close. Also, I would like to see them have keys so only certain people can open certain doors - although that could be tricky to code.
---


Text:        Can we please start having game elevators automatically return to the "down" position after a couple of minutes? This expansion is full of elevators, and everybody always leaves them at the top, which forces me to call the elevator down, then sit and wait for it. There's no need for this. They should automatically return to the "down" position. Or, you can avoid this problem altogether and leave elevators out of zone design. I very much hate the way you have implemented elevators in this game.
---


Text:        I think it would be really cool if you added a playable mermaid race, and an underwater city. But actual mermaids with full fins, and the place would actually look underwater. And all of the merpeople would get a spell that allows them to breathe on land for 2 hours at a time. Since they are aquatic they wouldnt be able to breathe on land without that spell. Or maybe you could just add actual mermaids instead of just sirens. Please consider the idea. =)
---


Text:        Re: Game Experience May Change During Online Play
I always knew that these warning words had to be there for a good reason. Once upon a time I viewed them as a simple disclaimer; little did I realise that the game would change so very much that I would wake up one day and realise that I really didn't belong here any more.
The thing is: after many years of living hand-to-mouth in Norrath, I've somehow managed recently to acquire a long-term lease. I suspect it had something to do with a fast-talking erudite. So, here I am, with the whole of Norrath open to me, and yet... and yet, I feel very odd.
I think I need to expand and expound...
Once upon a time (as I think I mentioned), it made sense to maximise my intelligence. Wisdom meant nothing to me back then. And so, my character developed: I became a very smart (or so I believed) but really rather, well, foolish bard. And, yet, strangely, it seemed to fit. That was me: I felt right.
But now, I find that for some really bizarre reason, my intelligence is leaking away, and I feel a nurge to gain more of a trait I've never had before: something called... wisdom?. This trend worries me mightily: instead of a clueless bard who sometimes does do the right thing in spite of himself, this half-mended crystal ball here is suggesting a wise old bird who's thick as two short planks.
That's just not me.
/sigh
Ah, well.
Thanks for listening, anyway.
---


Text:        Hi! There are a couple of things I'd like to suggest. One is quite big, I really don't like waking up on my doorstep if I haven't paid my rent. How about having it so that when you log-in, and you are in your home, and your rent is due, you get a dialogue box asking you to pay your rent, and if you don't THEN it chucks you out? That would be much nicer.
The second thing is quite small. I still live at the inn in Kelethin, and every time I leave, this idiot treant is telling me it needs a pruning. I wish I could give it a terminal pruning. Could you PLEASE shut the damned thing up?
Thank you!
---


Text:        btw would like to say to soe did a great job on 90 is the most enjoyed level i've ever done since lvl 60 good work . and think about letting alts get cella update without running the zone im very busy thats ruff when got 5 myth alt's .
---


Text:        getting knocked unconsious but not killed is a reeeeally cool event, instead of making it like the last 1% perhaps it could be the last 3% so it happens 3 times as much ?
---


Text:        OK qeynos is good, freeport is evil.  dark elf shadow knights, crafters or not, do not "offer to share the baked fish with their new hua mein friends."  Unless, of course, they have the option of poisoning it first.
---


Text:        Hello! [name removed] the gnome from the 'shire here! I was just in Gorowyn. You've changed it! I'd have to say, it was much more fun with all the elevators, but I suppose you made it simpler for people in a way? at least it shows you are listening to people!
---


Any chance you might listen to me? It would be really nice to see the Baubbleshire get a little improvement! Even a travel through Norrath ability on the dock would be nice. Gnomes seem to be increasingly common in Norrath, it would be nice for them to have a home.
---


Text:        For intentional raid wipes,  There should be an item added to the game that lets you commit suicide.  Like a poision potion or something.