Finally, the details of my costume from last Halloween!

To start with, I've been "aware" of Doctor Who all my life; having spent a couple years of my childhood in England (plus regular visits) I had watched it occasionally during the Tom Baker, Peter Davison, and Sylvester McCoy years as my cousins were big fans.  I was always a bit ambivalent; it was interesting but often scary to a kid, and I used to have nightmares about the daleks.  Although I'd sometimes watch it when other people had it on, I'd never watch it on my own. 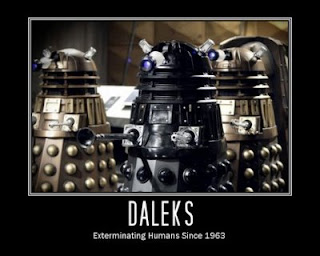 So I didn't rush into the new episodes of Doctor Who when it was revived with Christopher Ecclestone as the newest Doctor.  I watched a bit of one episode and it looked very very cheesy and I didn't really like the heavy romance feel of Rose, so I avoided it for several years.  However, eventually I gave it another try and got pretty hooked.

I've learned since moving to the US that buying a Halloween costume off the shelf is not something I'm a fan of.  Here's how I felt my first year here:

And especially since almost all the Halloween parties I've attended have been with co-workers, I'm not too enthusiastic about wearing little more than underwear!  So after the first year I've been making my own costumes.  (Two years ago: Felicia Day's "Codex" outfit from "Do You Wanna Date My Avatar"; last year a pirate outfit.)  This year I came across a few pictures of dalek-themed dresses.  Here, for example.  I didn't like the way they were almost all mini-skirted, however.  Daleks are not miniskirted; daleks showing legs seemed silly (and back to the "sexy dalek" idea from the cartoon above).  I decided to make a full-length dalek dress and see how it turned out.
First stop: finding a skirt.  I could have sewn one (I did sew the skirt for the pirate outfit last year) but it would be quicker, easier, and quite likely cheaper if I could find something adaptable in a charity shop.  I actually found an appropriate dress very quickly at the local Salvation Army: a floor length black ball gown, which was even already lined with crinoline stuff to make it stand out more.  Perfect!  Of course, it was a full dress rather than a skirt, but that was easy to change.  About $9 for the dress; no way I could have bought that much fabric and lining and sewn one for cheaper.
I also hopped on eBay and found a plain black satin corset, which I ordered.  Under $15 including shipping.
The first challenge I faced was finding something to make the bobbles on the skirt.  In theory any kind of foam ball should have worked, but after searching through quite a lot of sports and department stores, all I had managed to find was quite firm foam.  That would have looked fine, but if I wanted to actually sit down at all it would have been very uncomfortable.  I wanted to find something REALLY soft that would compress completely.  Eventually Amazon came to the rescue: I found 2 inch diameter sponge balls that were intended for magic tricks: Super Soft Sponge Balls.  At $35 this was the single most expensive part of the costume, but it turned out to be exactly perfect. They squish down into nothing at all and were just the right size. 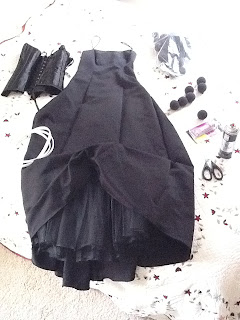 The sponge balls had been available in a variety of bright colours but I had decided on a traditional black-and-silver colour scheme so I ordered the black balls and picked up some silver spray paint and spent quite a while over several weeks cutting the foam balls in half and spray painting them silver.  This was probably the most time-consuming part of the costume, though not difficult.  Laying them out on the dress they seemed to be just the right size and I was able to estimate how many I'd need. 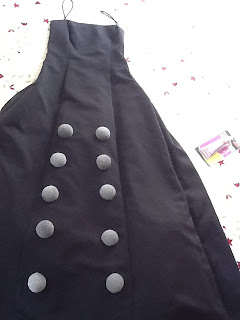 Next I converted the dress to a skirt by cutting off the top, shortening the side zip, and hemming the waist.  It didn't need to be beautifully finished since it wasn't going to be visible under the corset top anyway.  Once that was done I used a brand of "Goop" glue that's safe for both fabric and foam to glue the silver hemispheres onto the skirt. 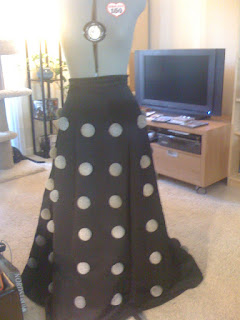 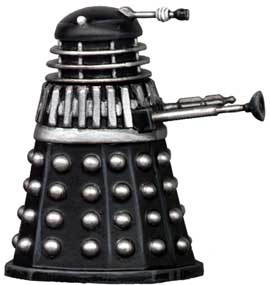 After looking at many, many dalek photos I eventually settled on just some simple criss-cross silver ribbon, in a matte silver to match the spray-painted sponge balls. 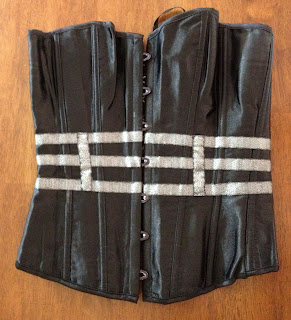 And that was the basics of the dress done; all that remained was accessories.  The toilet plunger was easy, I just picked up a wooden-handled toilet plunger at the local supermarket and spray-painted the handle silver.  Done. 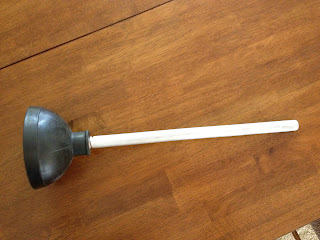 I didn't bother making something for my other hand, since I was clearly going to need a hand free to hold food and drinks and things anyway.  That left only my head.  Daleks have a central eyestalk-type thing and a couple small light-like things on each side.  At the local pharmacy I picked up a cheap wide black plastic headband and  a couple of small plastic bottles intended for travel-size shampoo samples or something like that.  I cut the tops off these and glued just the screw top part onto the headband.  Luckily I already had some little LED lights I'd bought for a steampunk costume I made earlier in the year, and one each of these fit perfectly into the bottle screw-tops.  The lights twist on or off, so I was able to just twist the lights on and drop them into the headband when it was time for the party.
The central "eyestalk" thing was the most complex to make.  I bought a blue LED from Radio Shack, as well as a small section of circuit board and a battery clip, and I soldered these together and fixed them onto a bit of coathanger.  Then I found a bit of threaded black plastic tubing in the plumbing section of the local hardware store, and used this to hide the coathanger, so only the LED stuck out the end.  I used FIMO modelling clay to make a base for the coathanger which I could glue onto the headband, and I cut the middle out of another of the black sponge balls and slid it over the blue LED so it hid the battery and the end of the plumbing tubing.  The sponge ball was still soft enough that I could slide if off as needed to insert or remove the battery at any time.  Finally, I used some black construction paper to make a series of small "fins" to add to the tube, making the "eyestalk" look more complete. 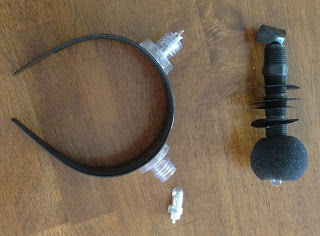 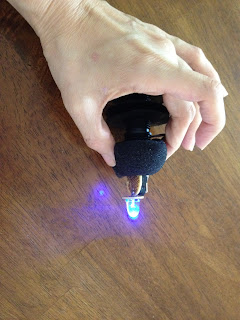 At the last minute I also bought a pair of long fingerless black satin gloves and glued a spare silver hemisphere onto each.  Not really necessary, but I happened to see the gloves and they seemed to match.
And here are a few photos of the finished costume at work on Halloween: 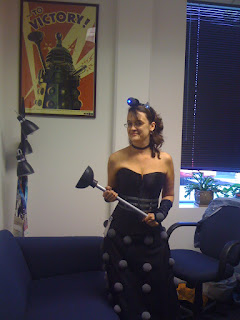 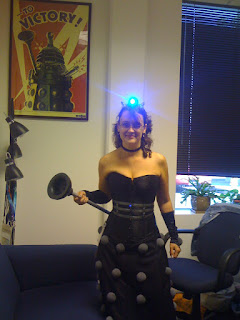 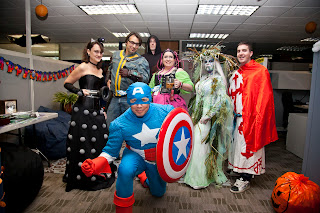 When all's added up it probably ended up costing about $100, which is not an insignificant amount, but certainly less than you'd pay for a purchased costume of the same quality and it was a lot of fun to make.  And looked really good!  I hope to get a few more uses out of it in the future.
Posted by Domino at 9:45 AM 16 comments:

Note 1: depending where you live, rhubarb may be hard to find (it is in San Diego).  I've had good luck finding frozen rhubarb in health food stores such as Whole Foods.  Bristol Farms and some other supermarkets sometimes carry it also but the frozen stuff is actually often cheaper.

Note 2: If you buy fresh rhubarb you will probably only be buying the stem, but just in case you get whole leaves, remember the leaf part is actually poisonous; only eat the red stems.


Bake in the oven for about 25 minutes, until the top is starting to brown and sticking a knife or toothpick into the topping shows it's cooked all through.  Allow it to cool for 5 minutes or so, then serve warm, with ice cream.

(You can substitute pretty much any fruit for the rhubarb and strawberry, just adjust the amount of sugar depending on the fruit used.) 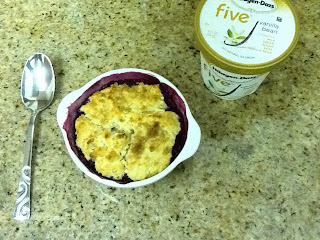 Posted by Domino at 8:31 PM No comments: