This is a traditional English meal which was probably originally made with a much tougher pastry so that farmers and workers could just slip it into their pocket to eat cold at lunch time. Nowadays it makes a tasty dinner or lunch either hot or cold.

Ingredients (for about 8 people)

Place the ground beef in a large mixing bowl. Peel and dice the potato and the onion. You can vary the relative proportions of potato and onion to beef depending on your taste, pretty much any proportion will work. Mix the potato, onion, and salt into the beef. You can do this with a spoon, but with your hands is easier and more efficient if you don't mind handling raw meat. It will end up looking something like this: 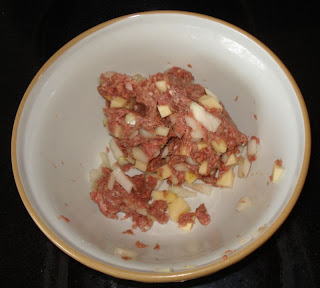 Lay the pastry sheets flat and use a small plate or bowl to cut circles out of them by running a sharp knife around the edge of the plate. If you're using store-bought flaky pastry sheets, you should be able to use a small bowl to cut two circles out of one sheet, aligned diagonally, and then put together two large triangles of the remaining pastry to make a large enough piece of pastry to cut a third circle. When working with flaky pastry, it's important to keep it as cool as possible, and not stretch it or pull it, as too much stretching can make it shrink or deform during cooking.
Lay the circles on a cooking tray, preferably on a sheet of parchment paper or similar to prevent sticking. Place a spoonful of the meat mixture on each circle. 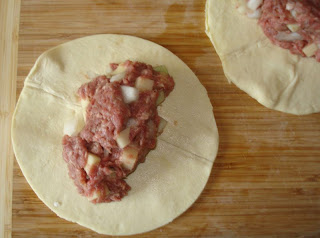 Run a damp finger around the outside of the circle to make it slightly sticky, then fold in half and pinch the join together so it sticks closed and makes a little packet. With a sharp knife, cut a small slice in the pastry on each side to allow steam to escape. 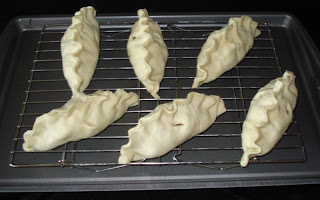 Once the pasties are all made, place them in a 425 F oven for about 30-40 minutes, until the crust is just starting to brown. You can leave them flat on a sheet of parchment paper, or sit them on a metal cooling rack, which will allow the undersides to cook more crisply. 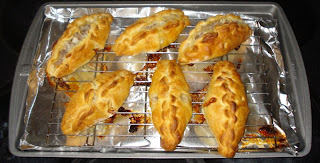 My first few posts on the G.I.R.L. blog are now up:

And so it begins again...

A busy weekend in San Diego

The tales we tell

Real life got suddenly busy lately so I've been a bit slow updating this blog, but I hope to be back to a more regular schedule soon. The idea is to talk about crafting stuff (both game and RL) here, and general women and gaming thoughts over there.

For those who play EQ2, you might want to check out the discussion thread on the SOE forums for proposed upcoming changes to the transmuting system. I was a little scared when I checked back on it after half a day and saw it was already up to 5 pages, but responses actually seem to be very positive, which is great to see (not to mention somewhat unusual)! =)
Posted by Domino at 12:09 PM No comments:

What do players want?

Text: I have lived on this newbie island since 2007, I watch adventures arrive here everyday and then rush off to the mainland seeking fortune. I myself like life on the island and feel no desire to ever leave it. I have one terrible misfortune though, I am completely homeless. There is no housing for those of us who live on the island. I am not asking for much maybe just a small bamboo fishing hut that only costs around a silver a week. It wouldn't need to be very big and only needs to hold maybe 50 items, just someplace to call my home would make me ever so happy.

Text: A businessman costume complete with tie and vest might make an interesting, albeit anachronistic, Nights of the Dead costume.

Text: quest Clockwork Componets-- how can one overboil grease and not have a MASSIVE 4-alarm fire?

Text: Whoever fixed the missing mask quest to auto-spawn billy - you have my deepest, most heartfelt thanks. Please inform your supervisors that you are in need of a pay raise, promotion and free booze.

Text: Survey from our group was unanimous, someone like the iksar nation or gnomes or whoever need to bulldoze GFay and add railways and lots of train stations. It's just a really horrible place to have to travel through!!

Text: It would be neat to have an item or ability that is 100% invisable. Nothing will see you.

One of the great aspects of Fan Faire each year is the opportunity to meet the folks who play our games, and to talk to them about what aspects of the games make them passionate. And we have a lot of very passionate players! And one of the things the EverQuest II team has done for a couple of years now is take away a list of top requests from Fan Faire, address them (where appropriate), and call out these changes in a special game update not long afterwards. The in-person discussions at Fan Faire help us to identify which issues folks are really passionate about, and help us make a list of key things that will really be appreciated if we prioritize them for a fix.

There were many things announced in the fan faire update patch this year, and most of them were not done by me, but one of the things that came up on numerous "wish lists" was the ability to put your mount in your home. This may seem like a fairly minor request, and gameplay-wise it is indeed not going to make you more or less effective at killing monsters. However, we have a huge variety of mounts that players can ride, from horses to flying carpets to wargs, rhinos, and dire bears, and many of them are very unique and attractive in appearance. We could all agree that it's disappointing, when you upgrade a mount to a newer, faster one, that you never use the old one again. So, wouldn't it be nice to be able to "stable" your old mounts in your home? Definitely!

There are approximately 190 mounts in EverQuest II at the moment, and allowing them to be converted into (and out of) house item form required creating 570 new files, in addition to editing the 190 original files. I volunteered to take this particular request on board, since I've got more experience creating perl scripts than many, and more experience creating house items than anybody else on the team. It still took a couple of days, but once the scripts were made and all the mounts located it wasn't too difficult a job. QA did a stellar job of testing out each one to make sure that it converted properly back and forth and -- quite importantly -- looked the same both ways. And so, when the patch went live, players were surprised and delighted to discover that suddenly that old nag they hadn't ridden for a year could now be put out to pasture -- literally put out, as a house item.

As I write this, it's not even been 2 weeks since the change, but already folks are putting together a selection of other, already existing house items to make stables, mangers, and pastures for their favorite retired mounts. Here are some screenshots of the first examples that have already been posted on the official EQII forums!

...I suspect I may soon need to add some feed/drinking trough and hitching post house items to help the horse-loving home decorating community. The merry go round is particularly clever! (Merry-go-rounds had been created previously using other animal house items that were already available, but the new pillar in the middle of this one from the previous game update patch, and the mounts with saddles, make this one look particularly believeable.)

I find it very satisfying -- we all do -- to see so many people embrace a small change like this with such enthusiasm, and have so much fun with it. It may not be killing dragons or getting uber loot upgrades, but it's no less rewarding in its way; in fact, at least for some portion of our player base, it may actually provide greater and longer-lasting satisfaction than a one-off raid kill. At any rate, it's great to see the things that folks are coming up with, and no doubt there will be many more screenshot posts coming in the next few months too. =)
Posted by Domino at 6:45 PM No comments: