I'm on holiday in England at the moment, doing a bit of touristing and catching up with family and friends.  My significant other has unfortunately caught a cold though so we're spending a quiet afternoon inside in the warm while he tries to sleep it off, leaving me a bit of time to catch up on email and stuff.  I don't have much relevant to tradeskills to say really, but here are a few vaguely tradeskill-related pictures:

Stonehenge, probably not actually related to druids in any way at all.  But I still wanted to go see if I could gather a blessed leaf from the middle of it, just in case I'd get to port back.  Sadly, tourists are kept back a distance away so no ports for me.  Druids or not, though, it's still an amazing feat of construction.  Apparently, 1/3 of the length of the stones are underground, so it's even more remarkable a RL crafting achievement than is obvious from looking at it. 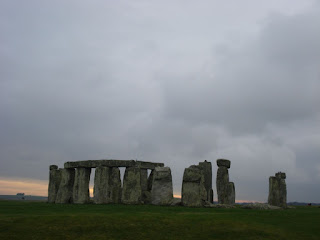 Next, for the provisioners:  how to make yummy, delicious marmite!  (This is a poster in the Marmite Shop on Regent St., London, where you can purchase all sorts of wonderful marmite memorabilia, as well as indulge in a cup of hot tea and a slice of toast with marmite in their upstairs cafe.) 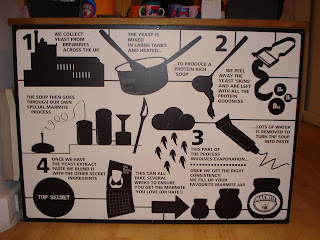 And last, but definitely not least, an actual suit of armour worn by Henry VIII (now on display in the Tower of London).  For some reason, modern fantasy MMO suits of armor are missing one of the rather, er, prominent features that this suit displays.  I wonder if armorers in EverQuest II would like to make this style?

Happy holidays all!
Posted by Domino at 8:40 AM 1 comment:

It's a well known truism in MMOs that you can roll up a sexy female avatar and people will rush to give you free stuff.

While there may be some degree of truth to this, I've never found it to be quite so cut-and-dried as all that. What I do find though is that in pretty much any MMO I have played, if you are friendly and polite and make conversation, particularly "in character" for whatever character you happen to be playing, others do react generously with help and sometimes gifts.

This certainly isn't limited to female avatars or pretty elfy ones though. While I do normally play female characters, I've experienced the kindness of others regardless of the attractiveness of my avatar. 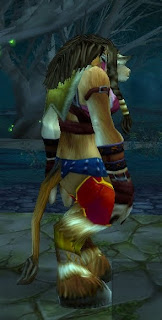 In EverQuest I noticed no particular difference between the offers of assistance that my dark elf and my gnome received.

In Star Wars Galaxies I played around with a Bothan (that's the race that looks like llamas) and was tipped very generously on numerous occasions because I spent my time in the cantinas actually entertaining others andby telling terrible jokes, instead of just AFK macro dancing.

In World of Warcraft on my very first day in game a nice fellow offered to buy me a set of free bags just because I asked some polite questions in a channel. Not only was I playing a Tauren (horned cow-like people) but he couldn't even have known what gender I was from my name in a channel (it was quite gender ambiguous). 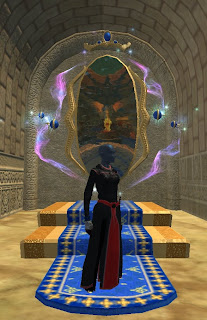 In EverQuest II groups frequently mistakenly call my bald and rather flat-chested erudite "sir", yet she's often been on the receiving end of kindnesses. Likewise, my ratongas (a race of rat people are hardly considered a sexy race, yet cheese and help have often been offered.

In City of Villains among all the spandex-clad superhero suits, I created a bespectacled, understated librarian type in a plain black business suit and almost the first person I grouped with asked for my help transferring money to an alt, then gifted me with tens of thousands of spare credits.

Clearly there's more to this than the simple assumption that avatars with sex appeal get gifts thrown at them.   Really, it's hard to believe that anybody who's played an MMO long enough to amass sufficient wealth to be able to throw gifts at random newbies would still be unaware that many female characters are actually played by males, and that the attractiveness of a female avatar in no way relates to the appearance of the person behind it.

No, it simply hasn't been my experience that just rolling up a_random_sexy_elf_girl_001 will guarantee showers of gifts.  Sure, flirting and deliberate manipulation may be one way of getting assistance (regardless of your gender).  But politeness, intelligent questions, and "in character" conversation, on the other hand, are almost always welcomed with kindness and assistance as well.  This is one stereotype I mistrust, and I suspect that a closer and more quantifiable measurement might go a long way to showing that life in an MMO isn't quite as black-and-white as the stereotypes would have it.

No real deep and meaningful thoughts here, I suppose.  It's crunch time at work and I'm back from over 12 hours in the office, so I'm probably lucky to be coherent at all.  Just some random reflections that have been bouncing around in my mind.  =)