Tradeskilling the Luck o' the Irish

Not a holiday I've ever paid much attention to, but apparently it's kind of a big deal around here.  Although this is not exactly how I'd ever pictured St. Patrick driving the snakes out of Ireland, I guess it could work! 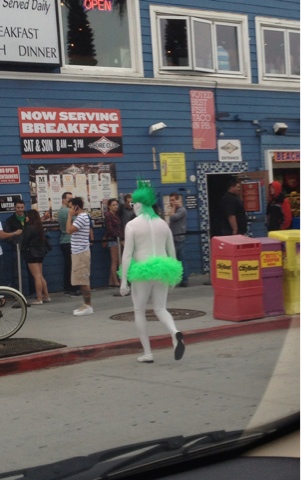 Completely unrelated to the above photo (it was too good not to share), walking through the park near my apartment today I found 5 four-leafed clovers today and one five-leafed, in an under-20 minute walk. Luck o' the Irish for me this St. Patrick's Day, apparently!

Can you spot the four-leaved clover in this photo I took today? 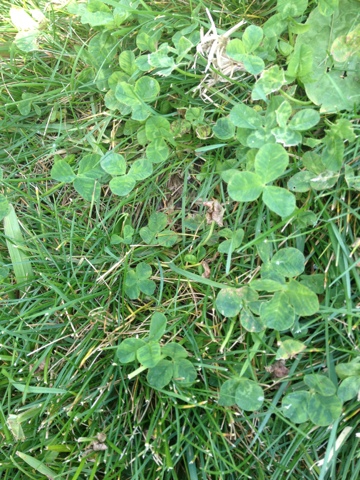 (Hint: it's in tbe south-west quadrant.)

I seem to have a knack for spotting four-leafed clovers and have found several there before, and I never know what to do with them. So, I've been playing around with jeweler's resin. I tried small paperweights first, then had the idea to try necklaces. 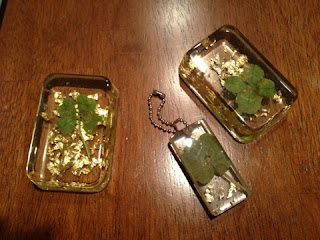 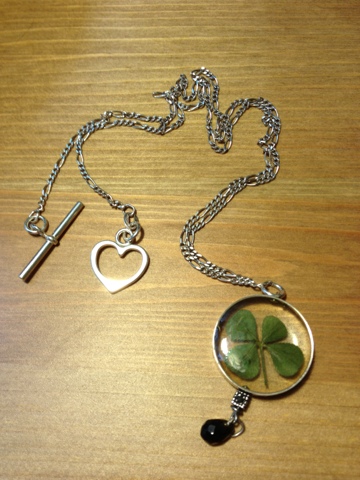 I took some photos of making necklackes as I went. Tradeskilling ftw!

First: bought some jewelry findings.  I tried out a couple of different shapes, including sterling silver hoop (above) and rectangle (below).  Plus, some silver flat head pins. 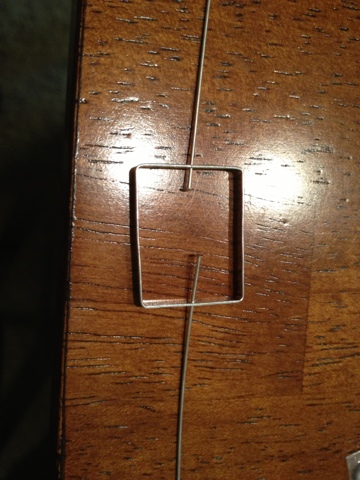 Next, resin. I tried ICE jeweler's resin brand, from Amazon.  Mix equal parts from the 2 bottles: 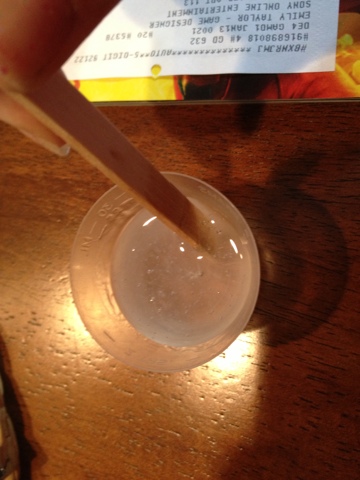 Then pour into the jewelry findings. I tried a few shapes. I used masking tape on the back, and poured in just enough resin to cover the bottom.  Mixing causes a lot of bubbles which slowly come out as it hardens, but I found using a pin to help smooth them out also was useful. 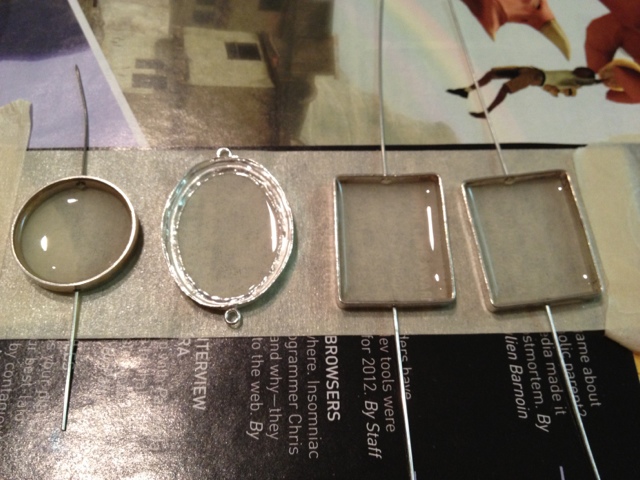 It takes about 24 hours to harden fully. Next day, I removed the tape. It left a rough surface, but I flipped over each one, then added more resin on the back to make the back smooth. 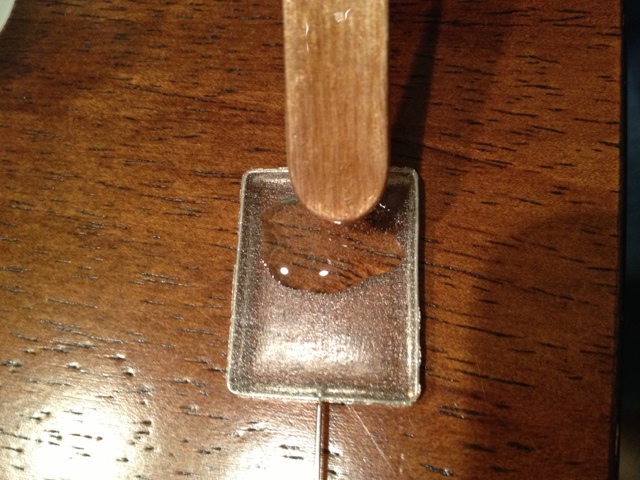 Once that is hard, add the clover (or whatever else will go in the pendant) and cover with more resin to make a convex surface.

If using a clover or other plant, you need to press and dry it first. I'd previously pressed my clovers for at least a few weeks under some heavy books; if you don't, they may decay inside the resin which obviously doesn't look good. There are plenty of YouTube tutorials with detailed walk throughs.

Finally, once the resin was hard, I added a chain and some extra beads to finish it off as a necklace. 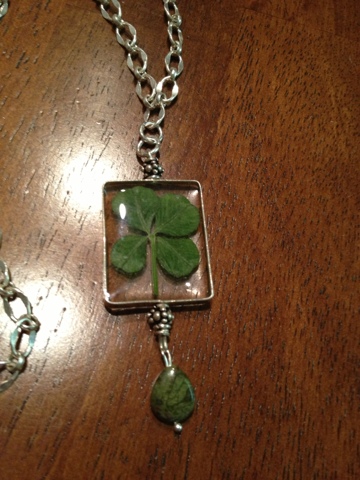 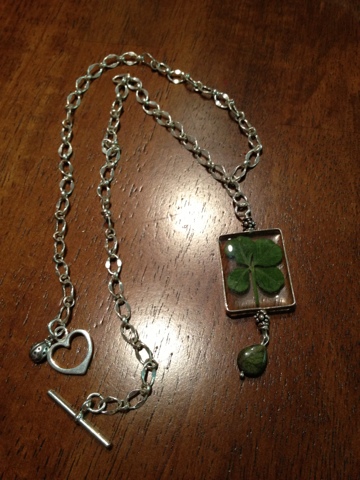 Since this one was a gift for someone who loves ladybugs, I also added a small ladybug charm I got from Etsy. 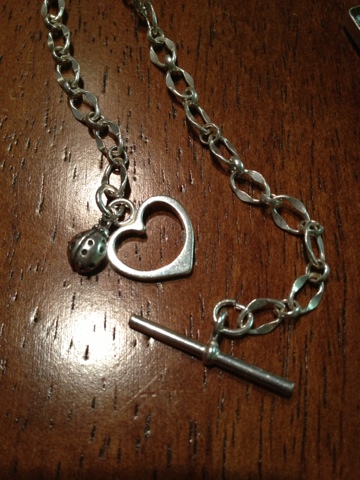 And a gift box - plain cardboard from Michael's: 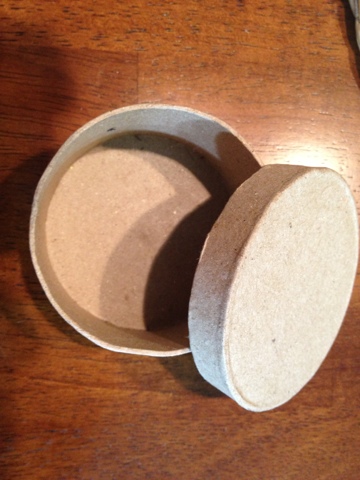 Plus some paint and wire, which I already had lying around: 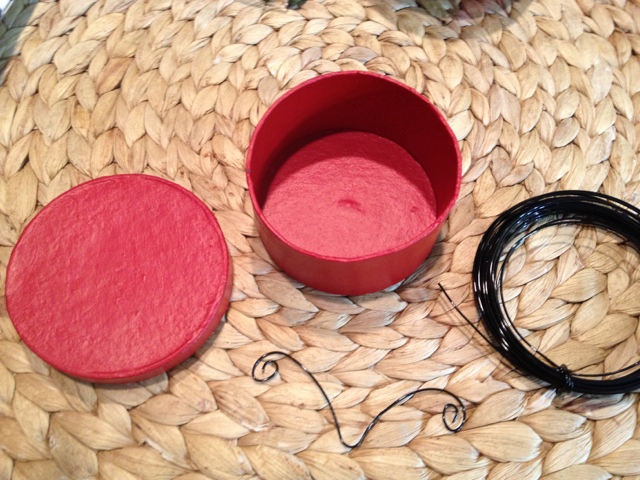 A little box of good luck and good wishes, ready to deliver! 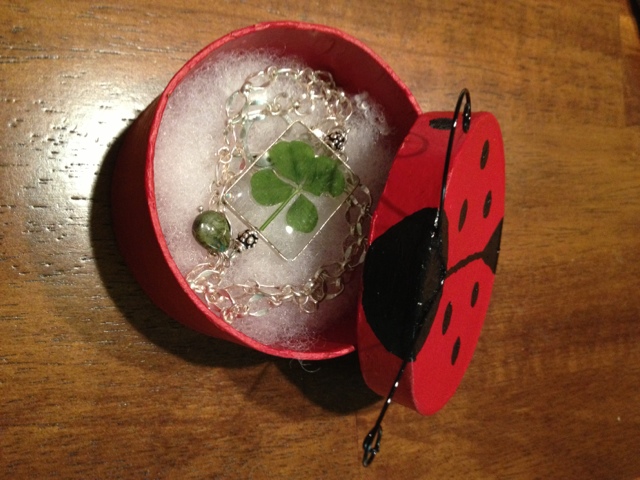 Still not quite sure what to do with all the clovers I found today, but they're in a book now being pressed and dried.  These do make nice little gifts for friends who're needing a little luck. And, of course, great accessories to go with your St. Patrick's Day tutu!

Update: adding some photos of more clover pendants I've made since the original post! 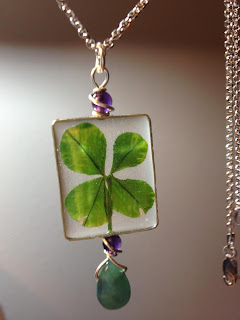 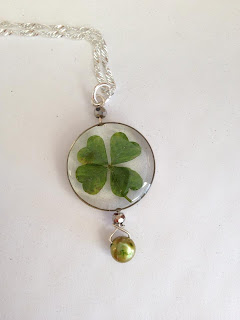