This week on SOE's GIRL blog I talked a little bit about Felicia Day, creator of the web series "The Guild":

A Touch of Hero Worship

What I didn't mention (as it wasn't quite finished when I actually wrote the post) was that I decided to dress as Felicia Day's character Codex from "Do You Wanna Date My Avatar" for Halloween this year.

And to do that, required a little bit of Real Life tradeskilling.

Fortunately, out of all the costumes from The Guild, Codex's looked to be the simplest to make.

Unfortunately, I'm really not that good at sewing things and can only plod along at the most basic level! I do have a sewing machine now (it was a Christmas present last year) but all I've made with it so far has been a small quilt, some curtains for the house, and some linings for bags I've crocheted. This was a step beyond that!

Still, I picked up some fabric and a corset pattern, and a white bra to use as the foundation of the dress, and learned a lot.  Mostly, I learned why people charge $500 for corsets they sell online.  They are a pain to make, even with helpful tips from the lady at the fabric store!  (Best tip:  use the large size plastic cable ties from Home Depot instead of commercial corset boning.  Much cheaper and generally stronger too!) 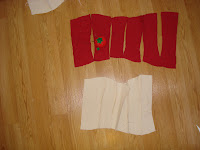 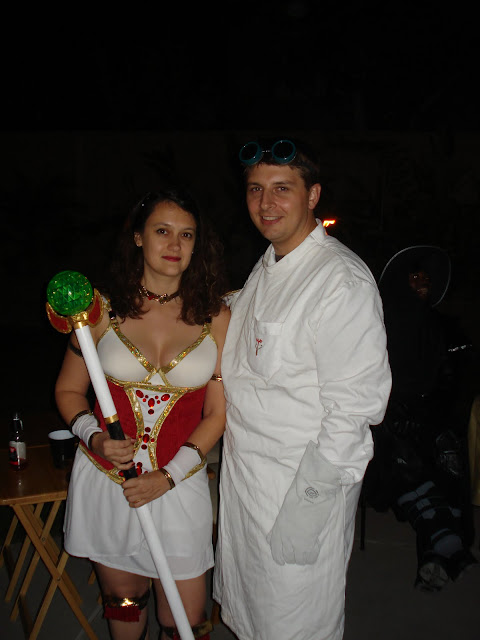 I broke 3 sewing machine needles in the process and ran out of time so the staff and accessories (like kneepads and bracers) are less detailed than I would like, but on the whole I'm pretty happy with it as a first attempt!  If I wear it again I may try to improve some of those details I didn't have time for this year.

(The Dr. Horrible lab coat was something I made last year.  We couldn't find a side-closing lab coat like Dr. Horrible's, so I converted a front-button one to a side-button one, added some details, and embroidered the little caduceus logo on the pocket - that caduceus along took almost 3 hours!)

The funniest observation came from "Dr. Horrible" as Halloween approached and I was madly trying to finish up the sewing.

"Are you going to dye your hair too?" he asked (since Codex/Felicia Day is in fact a redhead).

"Good grief no, that's way too much effort," was my immediate reflexive response.  At which he just looked at me for a moment and then pointed out that relative to the weeks of sewing effort I'd already put into the thing, dyeing hair really wasn't much effort at all.  And I had to laugh at myself a bit because it was very true.

Nonetheless I did not dye my hair. Probably because making the costume was interesting and a tradeskill challenge; dyeing hair is a nuisance and smelly and not fun at all.  You gotta draw a line somewhere, after all!

Anyway, as I said in the GIRL blog post, Felicia Day is a pretty impressive lady and a great role model for girls in gaming (for anybody, in fact).  If you haven't yet watched The Guild, visit their site, find season 1, and get started.  Episodes are very short, generally 3-7 minutes, and if you've ever played any MMO I guarantee you'll find it hilarious.  You can also buy the DVD now and support a great independently produced show.  And incidentally, I was not paid to say any of this ... it's just true.  So go do it.  =)
Posted by Domino at 8:35 AM